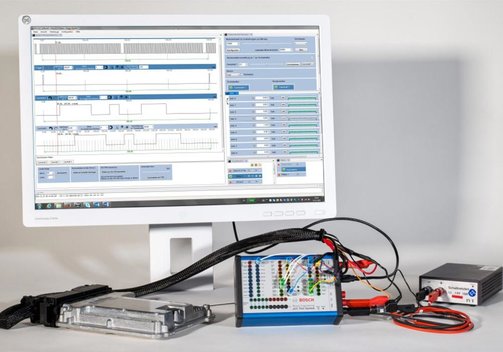 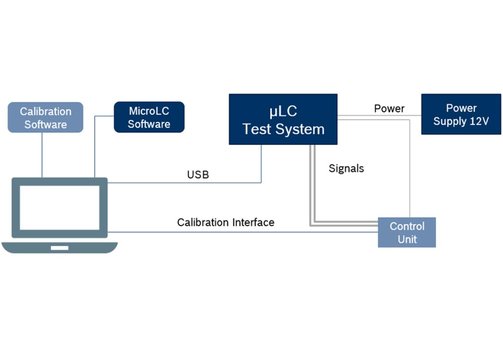 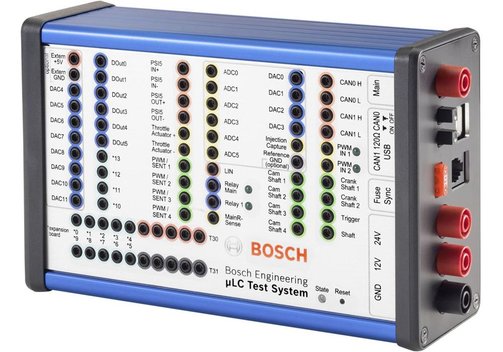 This Article is currently not on stock. Please enter your mail and we will notify you when the product is back on stock.
close
Please fill in all fields.
Description
Accessories
Files/Downloads

The compact HiL system Bosch µLC Test System is an open-loop test system for quality assurance of control unit development, especially for mobile automotive applications, but also for other areas of control technology such as embedded, power electronics, consumer electronics, machine and plant engineering. It combines the simulation of all typical automotive sensors and communication protocols in one unit, such as analogue/digital inputs and outputs, PWM signals, SENT, CAN, LIN, and speed sensors. An initial test setup typically takes under ten minutes. Due to an intuitive user interface the operation of the device and data evaluation is easy.

Question: What is Hardware-in-the-Loop?

Answer: Hardware-in-the-loop (HiL) is a process in which a real environment is simulated for testing of a component (e.g. a control system). For example, to test a car engine control system, the car is simulated using a model. For this purpose, the HiL simulator must provide the appropriate inputs and outputs with which it can be connected to the control system in order to simulate the behavior of the vehicle in reality and in real time. Frequently recurring processes can be simulated particularly well in this way. The HiL simulator is thus a computer system that simulates the behavior of an environment by receiving and delivering data via interfaces and analog and digital input/output channels, just as sensors/actuators would do in the real environment. This creates the control "loop". The principle can already be used during development. In the optimal case, it shortens the development time and saves costs. The consistent, unchanging test environment of a HiL system can reliably demonstrate the elimination of a fault. However, a simulation usually cannot reproduce reality down to the last detail, so tests on the real system are of course still necessary.

Question: What does a typical HiL test setup with the Bosch µLC Test System look like?

Answer: The Bosch µLC Test System supports the CAN/CAN-FD, LIN, and SENT interfaces commonly used in the automotive sector. In addition, there are 12 analog outputs (8x 10 bit/4x 12 bit, range 0 to 5 V/5 mA) and 6 analog inputs (12 bit, 0 to 40 V). For controlling switching operations, 6 digital outputs and 2 relay channels are available. These channels are supplemented by 2 PWM inputs and 4 PWM outputs (pulse width modulation), as used, for example, for controlling motors. Especially for automotive use, speed, throttle and cylinder pressure simulations are possible. In addition, the system can be expanded with the available expansion boards.