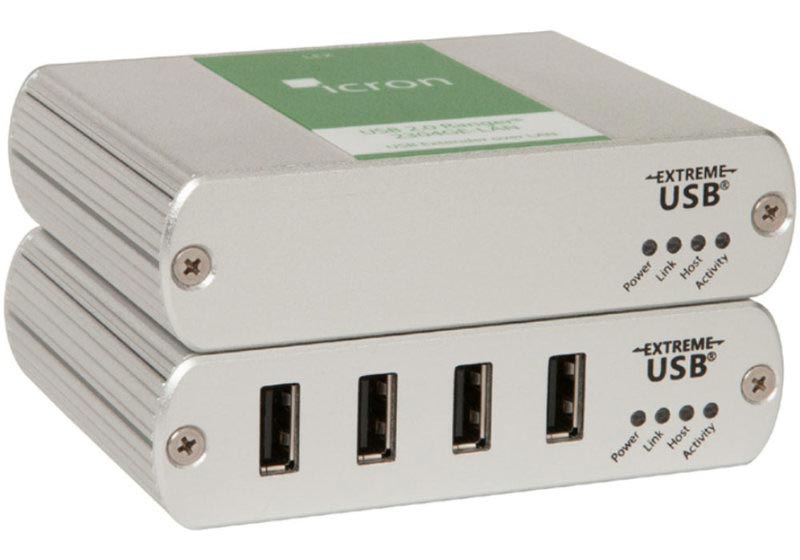 Scaled Prices
€ 464,10
€ 440,90
€ 464,10
including VAT free shipping (Germany)
This Article is currently not on stock. Please enter your mail and we will notify you when the product is back on stock.
close
Please fill in all fields.
Description
Files/Downloads

These modules are used to extend the USB transmission with 100 m. The extenders are connected with commercially obtainable standard Cat5e/6/7 Ethernet cable. Or you can use an existing Ethernet/LAN. Integrated 4-port hub on REX side.

Answer: Icron USB extensions extend the transmission distance of USB over standard Ethernet copper cable or fiber optic cable. The extensions consist of LEX (local extender at the host/PC/laptop) and REX (remote extender for the remote devices such as cameras, storage, etc.). Cabling: Connect LEX to PC via short USB cable, long connection LEX-to-REX via Cat or fiber optic cable depending on the model and connect the remote devices to REX via short USB cable. Depending on the model, LEX and/or REX requires a power supply.

Question: Can I extend USB over an existing Ethernet/LAN?

Answer: In this case, use the ▸Ranger 2301GE-LAN or Ranger 2304GE-LAN models (the latter is the version with an integrated 4-way hub). The principle is the same as for the other Icron models, but instead of a dedicated line, an existing Ethernet is used. The total distance or distance between Ethernet switches can be up to 100 m. Again, the LEX is connected to the local PC via USB. Now use a Cat cable to connect the LEX to the Ethernet (wall jack/switch). The REX is connected to the same Ethernet at the remote point via Cat cable, powered via power supply and connected to the remote device(s) such as cameras, remote storage etc. via USB.